Our Guide to Diamond Engagement Rings
in West Milford, NJ

Find the Right Diamond for You

At Forever Jewelers, we understand the importance of choosing the right diamond for your custom jewelry. Everyone has different tastes and preferences. Whether you’re looking for wedding jewelry or diamond engagement rings in West Milford, NJ or the surrounding areas, we have the diamond solutions you need. Forever Jewelers provides a wide range of diamond styles including princess diamonds, round diamonds, pear diamonds, and cushion diamonds in various carats.

In the event that something happens to your jewelry after your design has been crafted and sold, Forever Jewelers also provides jewelry repairs in Orange County, NY and the surrounding areas. When you choose Forever Jewelers, you can rest assured that your jewelry is in the right hands. Contact us today for more information or for a free estimate. We’ll be pleased to answer any questions you may have about our diamonds, custom jewelry design, or jewelry repair services. 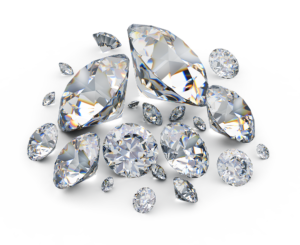 A single diamond can speak a thousand words, and those words will last forever. Let your gift express how you feel knowing that we at Forever Jewelers are taking care of you.

Diamond professionals use precise standards for grading diamonds that determine their value. Learning these standards of diamond evaluation will help make your buying process complete and comfortable. A diamond’s value is influenced by its rarity and the expert opinion of diamond graders. At Forever Jewelers we are determined to teach you the significance of the four Cs used by diamond graders, this will help you make an educated decision with your diamond purchases.

Once you are comfortable with the four Cs terms, you will be ready to make an educated purchase. If you have any questions concerning grading and buying diamonds, do not hesitate to call or e-mail us. A well-educated diamond professional will be able to answer all of your questions.

Just below you are able to search through the finest source of natural GIA (Gemological Institute of America) certified diamonds that have gone through the rigorous
grading process.

When weighing diamonds the measurement used is called a carat (1.00). Each carat is equal to 100 “points”, like pennies to the U.S. dollar. Twenty-five hundredths of a carat or 0.25ct is often referred to as a “quarter carat” or “25-points”. The same goes for five tenths of a carat or 0.50ct, one might call it “half of a carat” or “50-points”, and so on. In order to determine the exact weight of a diamond or any other gemstone, it must be loose.

When a piece of jewelry has many of the same type of gemstones in it, the carat weight is determined by weighing all of the same stones together. The sum of these stones is then referred to as “carat total weight”.

In general, the larger the carat weight, the more it will cost. This is because larger stones are more rare.

Most people think that all diamonds are colorless because the majority that are sold range from nearly colorless to a slight yellow or brown hue. Diamonds occur in every range of color. Very few are truly colorless. The Gemological Institute of America has developed a color grading scale, starting with the letter D, that uses letters of the alphabet to distinguish the various colors in diamonds without confusion.

The amount of color you see depends largely on a diamond’s size, how it is cut and how it is mounted. The larger a stone is, the more apparent its color will be. An analogy of this is comparing a glass of red wine to a carafe of red wine. The glass of wine will appear lighter in color than the whole carafe.

Clarity is the degree to which a diamond is free of inclusion or blemishes. An inclusion is an internal clarity characteristic such as other mineral crystals, feathers, breaks or drill holes created by clarity enhancement. A blemish is a characteristic found on the outside of a diamond’s surface. Small nicks, scratches or rough parts left on a finished stone are considered blemishes.

In order to make clarity grading easier to learn and understand, G.I.A. created a universal method of grading diamonds. Starting with flawless, which is very rare and has no inclusions or blemishes that can be detected by an expert diamond grader under high magnification, and ending with imperfect, the exact opposite, the middle range is where the majority of diamonds are found.

As with weight and color, the effect of clarity on value relates directly to rarity. Flawless or nearly flawless diamonds are more rare and therefore demand much higher prices than diamonds with slightly or very noticeable clarity characteristics. Location of inclusions and blemishes also has a bearing on the final clarity grade. Inclusions in the center of a diamond’s table may negatively affect the overall clarity grade more so than if the inclusion is found in the crown facets. Diamonds in the SI clarity range are often called “eye-clean” diamonds in the trade when they are such that the inclusions are present, yet difficult to see without magnification. These should not be overlooked as they will often be more affordable and may allow for the purchase of a better grade of color, cut or larger carat size.

I.F. – (Internally flawless)=A diamond with no inclusions found using 10x or higher magnification. Minor blemishes on the surface may be tolerated.

VS1 – (very slightly included to the first degree)=A diamond that contains very small inclusions that are only visible with difficulty under 10x magnification to a trained eye.

VS2 – (very slightly included to the second degree)=A diamond that contains very small inclusions that are only visible with 10x magnification to a trained eye.

SI1 – (slightly included to the first degree)=A diamond that contains small inclusions that can be seen under 10x magnification and may be noticeable when guided with the unaided eye.

SI2 – (slightly included to the second degree)=A diamond that contains noticeable inclusions that can easily be seen with 10x magnification and can often be easily seen when guided with the unaided eye.

SI3 – (slightly included to the third degree)=A diamond with inclusions noticeable without magnification. This grade is not recognized by G.I.A.

I1, I2, I3 – (imperfect to the first, second and third degree)=A diamond with obvious clarity defects that may have large cleavage or inclusions that may influence durability. These stones also often lack transparency and brilliance.

These are diamonds that have been physically altered to make them appear more desirable. They can also make the cost of buying a diamond more affordable, especially with large stones. There are ways of making some inclusions less noticeable in larger, more included diamonds. Fracture-filling is a process in which a glass-like substance is melted and injected under extreme pressure into nearly colorless diamonds to create a better-looking clarity. By filling the inclusion, light is able to pass through it and it is therefore less noticeable. Sometimes diamonds can be drilled with a laser allowing dark, unsightly inclusions to be “bleached” and create less obvious characteristics.

These effects are safe and durable providing that your professional jeweler is made aware that your diamond has been clarity enhanced. Exposure to direct fire or strong acids or bases could reverse the clarity enhancement process. If repairs or adjustments need to be made, ForeverJewelers.com is fully capable and willing to work on your clarity enhanced diamonds.

Cut is the human contribution to a diamond’s beauty. The cut can enhance color and hide inclusions if done correctly. In terms of the 4 Cs, cut includes a diamonds style and make. Style is the basic pattern of the facet arrangement, the shape of the stone, or both. Make refers to proportions and finish.

Any style of cutting will create an attractive appearance, but proportions are the key. When a diamond’s proportions are correct, it will display a brilliant, fire-like effect. Many modern cut diamonds have near-perfect or perfect proportions. When buying antique diamonds, the proportions can be different and sometimes not in proportion. This, however, creates a unique display of of its own and is often desirable.